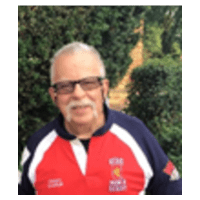 My introduction to Rugby came in 1970 while working on industrial waste treatment research at Amoco Oil Co in Naperville. A group of coworkers from the British Isles, Ireland, South Africa, and Australia started a rugby team and invited me to join them. After one season the hook was set, never to be removed!

I played with Amoco RFC through 1977 and then joined the South Side Irish RFC  (1977-95). I played mainly as a back, fullback, fly half, and wing. I did play every position, except the tight five in 15s, and all positions in 7s. I held the positions of Match Secretary and Treasurer with the South Side Irish. While with the Irish I toured Ireland three times and Canada twice.

In 1989 I joined Jack Cushing as the backs coach at the University of Illinois Chicago and later became the head coach in 1998. The UIC team has been very competitive, winning conference and moving on to sectionals multiple times. In 2009 the men’s club toured Ireland. In 1998 I also joined the Mount Carmel HS coaching staff. I have coached high school select sides, CARFU College select sides, and CARFU developmental men’s sides.

My Coaching Philosophy: Instill the importance of mental and physical fitness in rugby players including conditioning, individual skills, “group” skills, “team” concepts, and the ability to read the field, ie: take advantage of the opposition’s weaknesses and UIC’s team strengths. By playing fundamentally sound rugby while improving fitness and skill level UIC will play winning rugby. Instill the importance of the UIC Rugby Club family/brotherhood in all players.